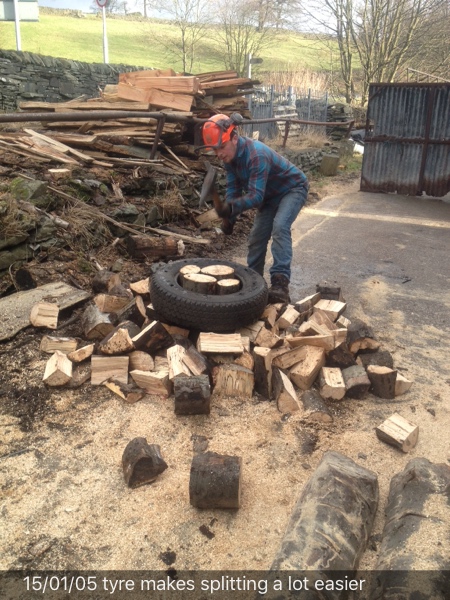 5th January 15 Jack had seen this on YouTube , putting rounds inside a tyre then splitting them. This turned out to be very effective as the split bits of wood don't fly off and then have to be repositioned to split again. However splitting rounds should be avoided if you can, let the processor do the work. 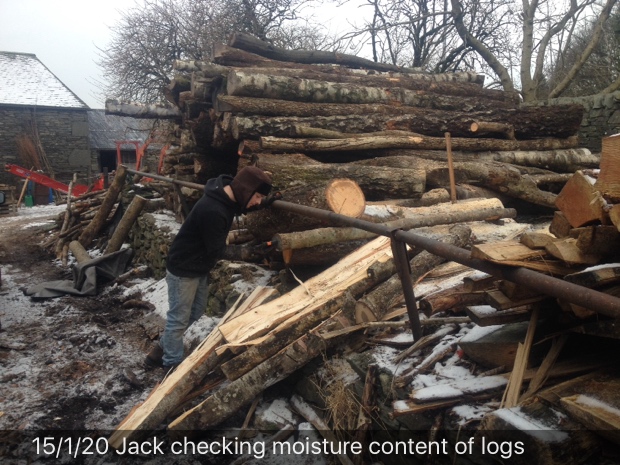 20th Jan 15   4 meters is the best length for Stewart Wilson's trailer and they fit onto the platform just right at Orrest Head Farm . The only problem is that 4m logs don't season quite as easily. These had been in the pile a year and were still had a moisture content round 30 percent. They do dry out quite rapidly when split and put in a log shelter, and keeping a tarp over them helps. 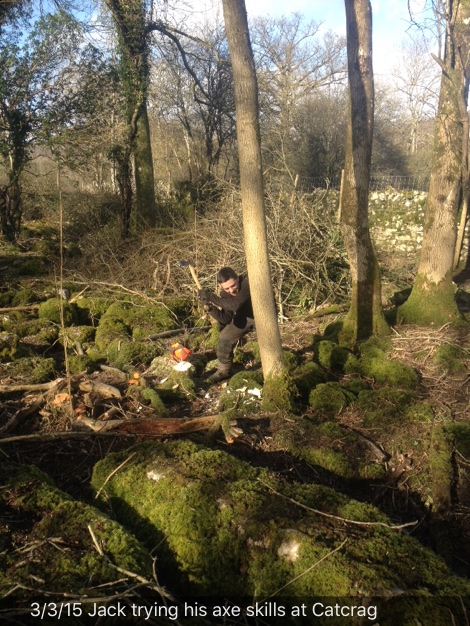 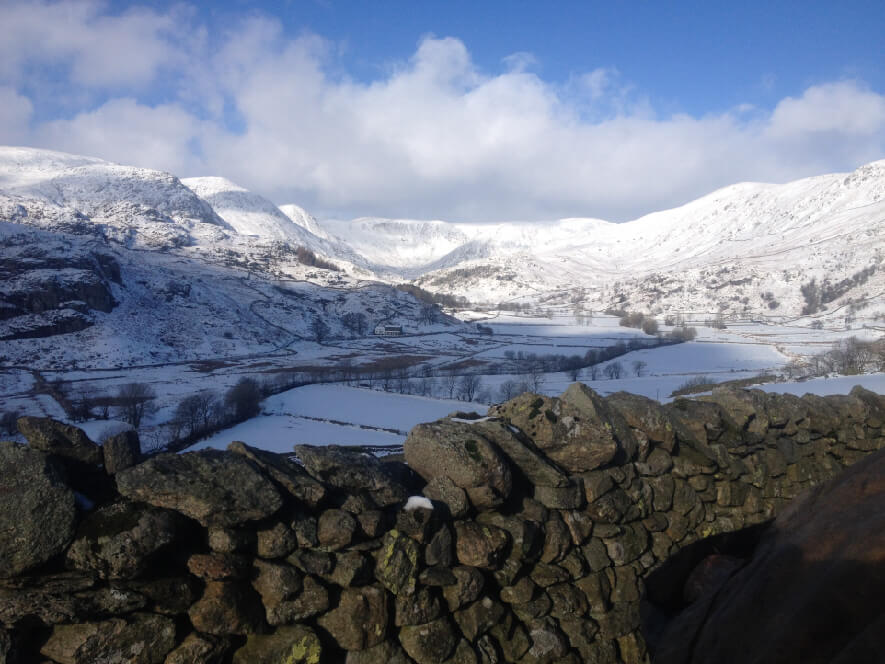 30th January  firewood deliveries to Kentmere valley can be quite extreme in the winter, but very picturesque. 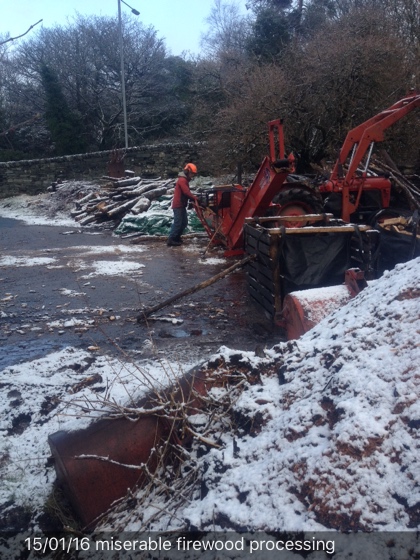 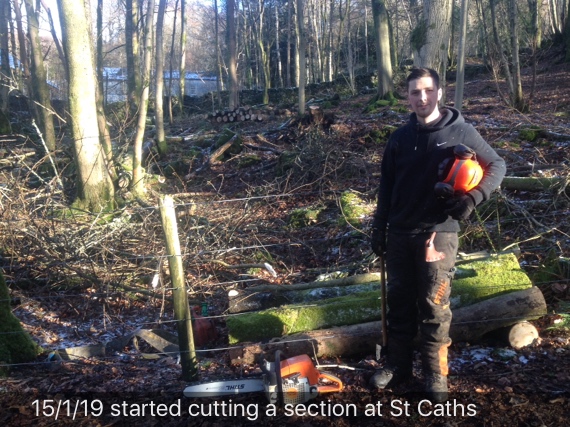 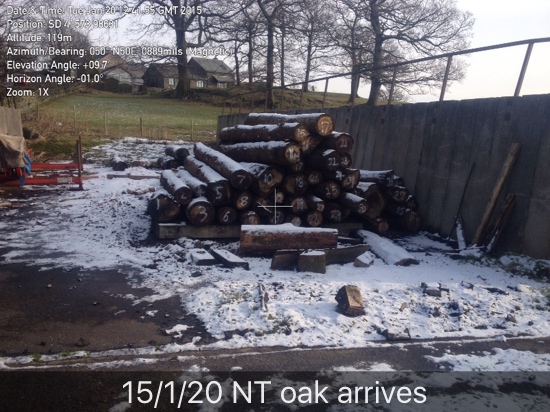 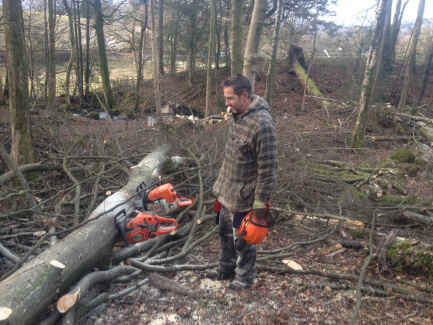 2nd February  to get one saw stuck is unfortunate, to get two stuck is..... 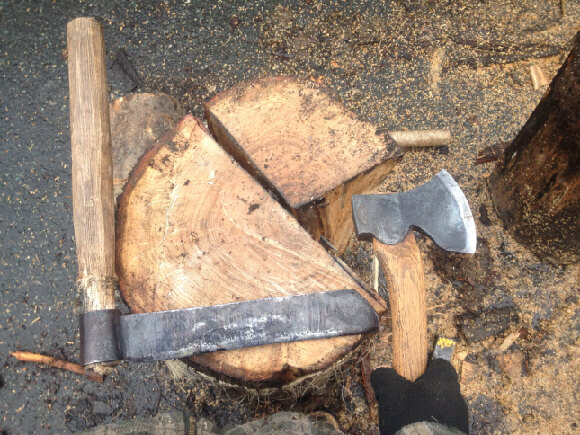 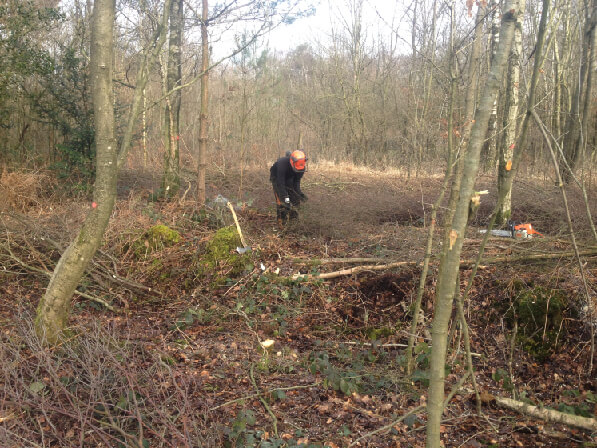 20th February 2015 - Jack cutting in Roger Cartwright's wood at Silverdale. This was a small section of mostly birch regeneration which was excellent for birch tops. These tend to be the product more than any other that is consistently in demand. They can be used for besom brooms , besom broom making demonstrations and courses,  and Sussex pimps (bundles of birch tops and split hazel used for kindling). 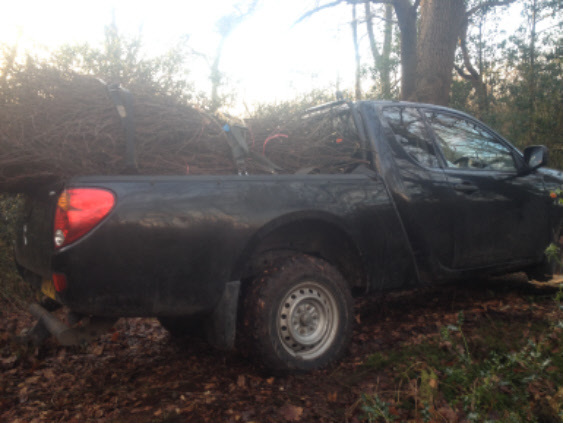 The pickup loaded with birch tops , they will need weighting down and leaving till the following winter before being used. This wood is on the mosses and the track is marginal at best. The best way of dealing with it is to get up to a good speed to carry you through the soft bits. 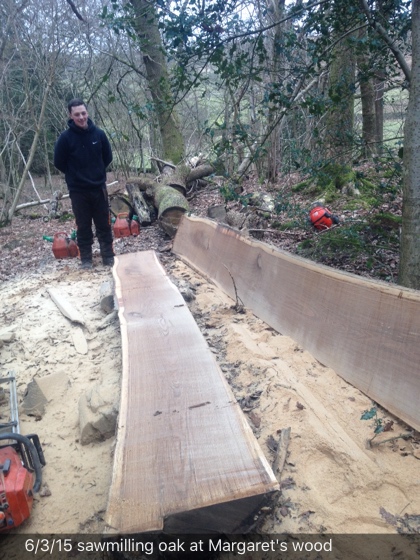 Chainsaw milling in Margarets wood in the Winster valley. Oak was windblown but produced some brilliant but very heavy boards. 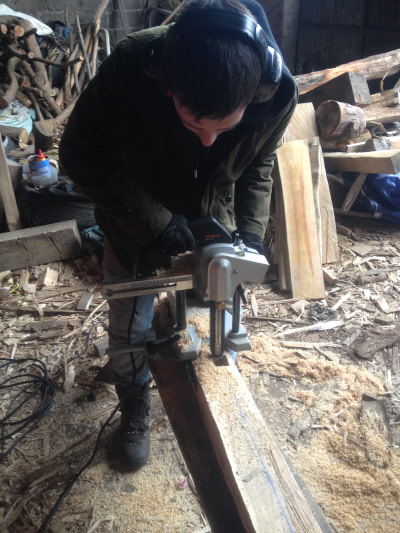 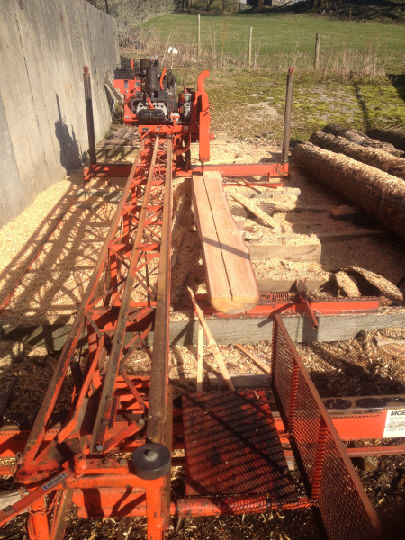 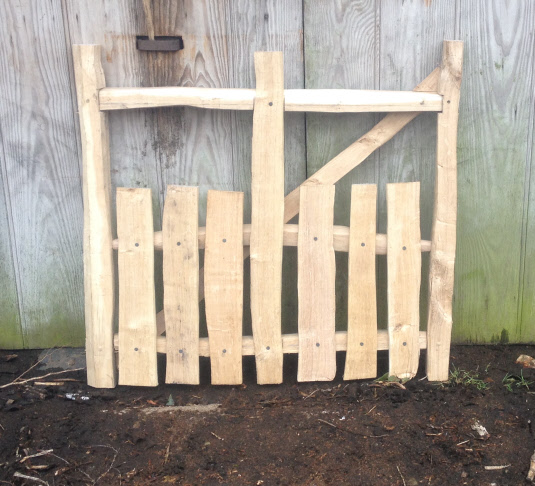 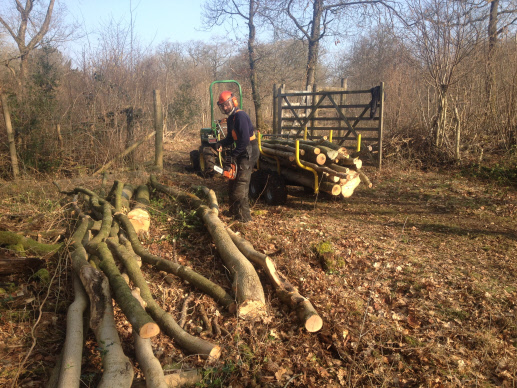 17th March 2015 - Dan Sumner contracted us to move his cut firewood down the hill to be stacked where a forwarder could get to it. There was quite a lot and we had to handball it onto the trailer which did very well , the rocking beam axels are very good at floating over rocks. 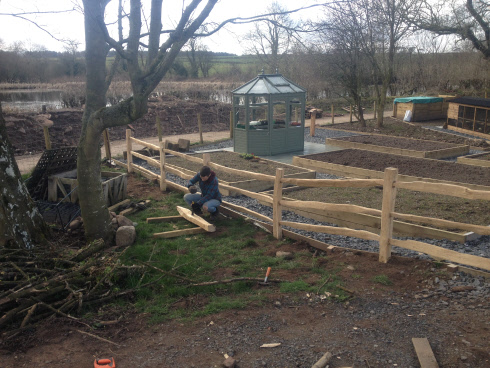 24th March 2015 - second fence of the year going in at Dalston near Carlisle. Good ground conditions made this an easy job to get the posts in. There was a thick layer of clay just below the surface which really hold onto the posts. 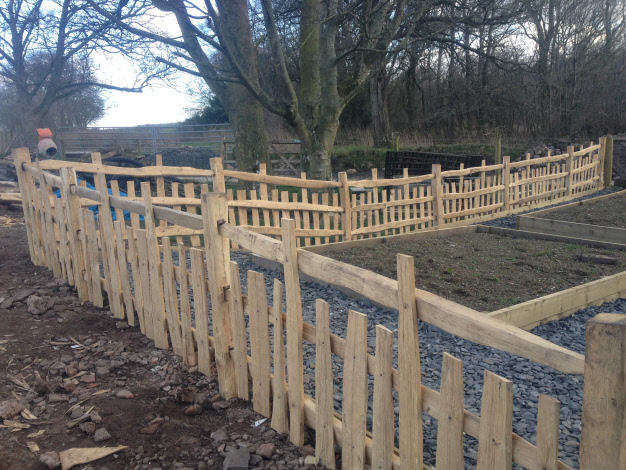 The finished fence with the palings on . 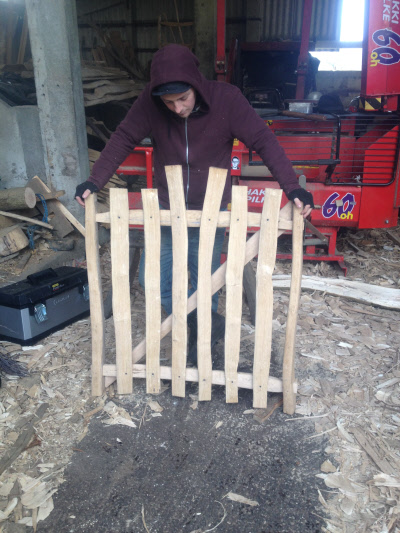 1st April 2015 - Jack has made a very nice gate for our next job at Bampton. He has taken to making gates very quickly and gets a great finish on them. 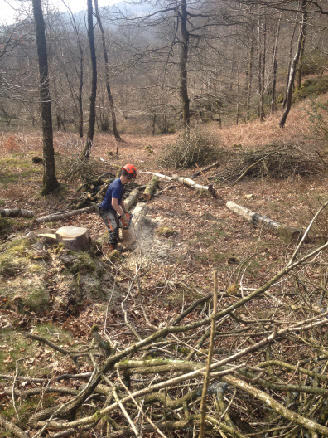 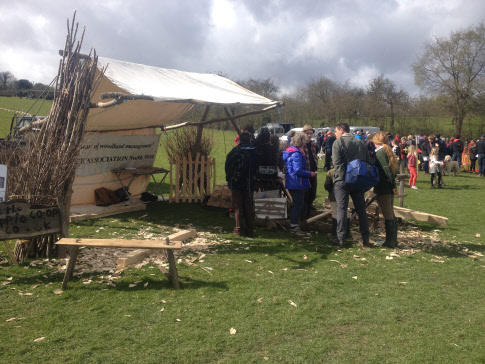 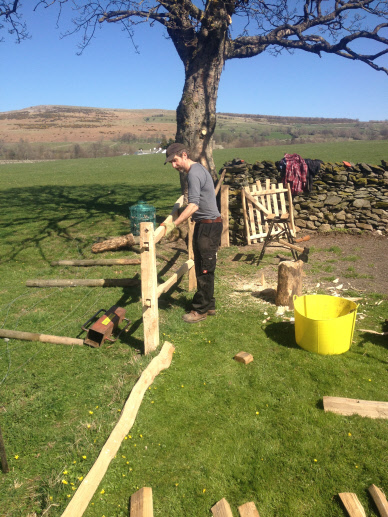 16th April 2015 - a two rail post and rail fence for a property near Bampton . This garden was next to a small river which becomes a big river in wet weather so the fence had to have struts built in near the water to cope with flooding. They worked very well because Storm Desmond hit the following winter and the fence survived . 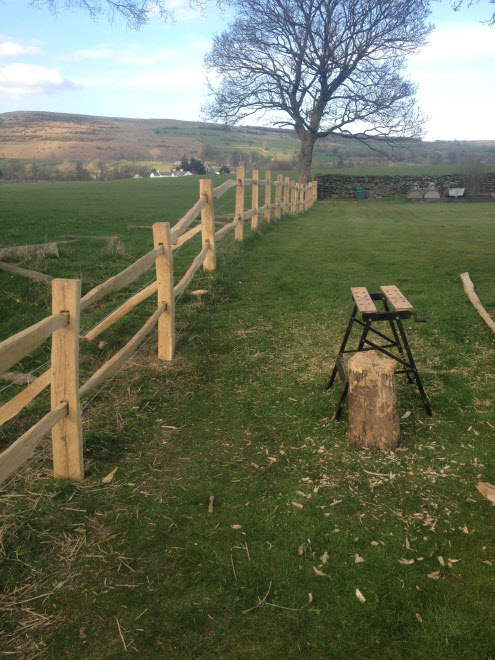 The fence nearing completion, sheep and lambs are in the neighbouring field at times, the fence has two strands of wire on it so the farmer can put some netting against it when the lambs are about. This works quite well so there isn't a thick barrier when the river floods. 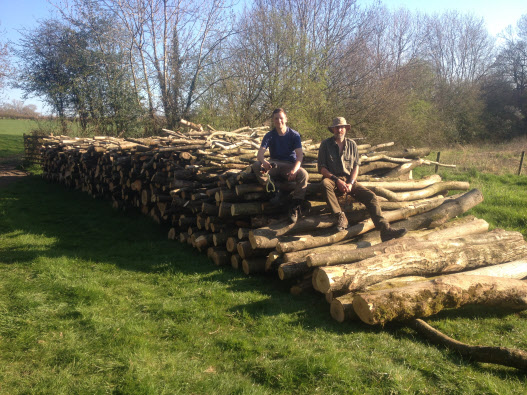 21st April 2015 - the fruits of our labours. Every one of these logs has been lifted on and off our little tractor and trailer, 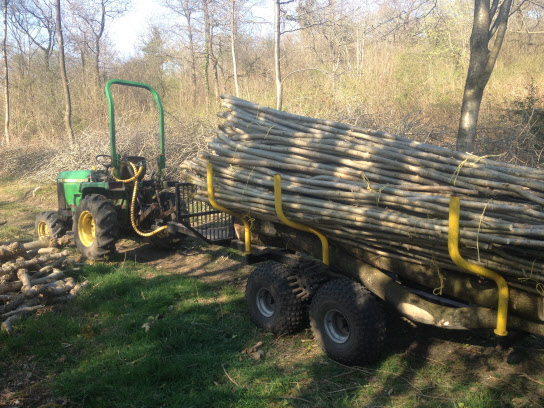 23rd April 2015 - trailer load of yurt poles being brought down the hill at Hutton Roof. Some really good poles. 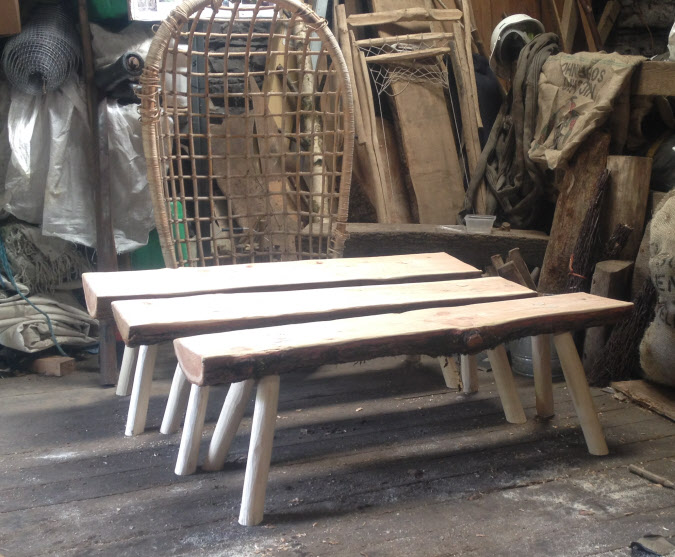 7th May 2015 - another cleft oak fence, this time a simple paling version which went round a new boat house on Windermere. The owners have commissioned a new wooden launch from Pattinsons boat builder to go in the boat house. Its great when people go out of there way to order local products. Our luch times were very pleasant at this spot as we could sit on the end of the jetty to have our butties. 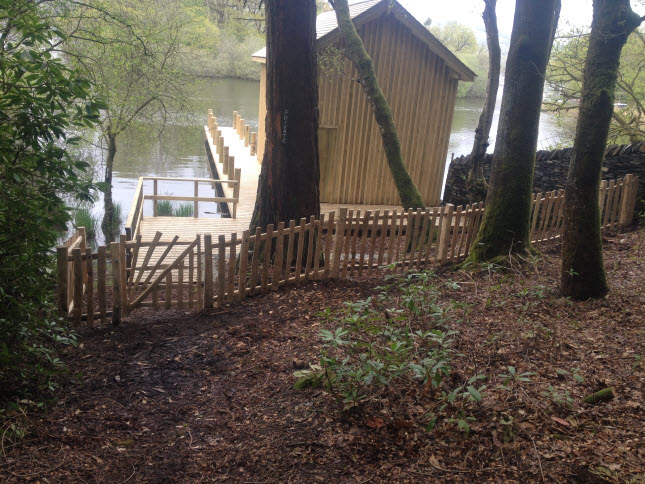 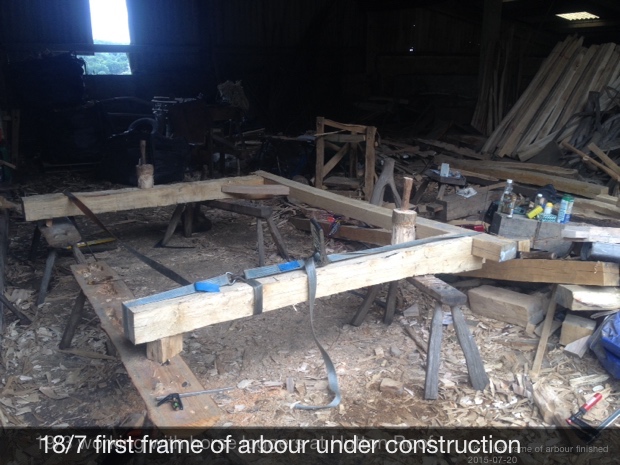 Arbours are usually a bit stressful, the legs have to go onto accuratly made foundations so the frame has to be square and accurate.

We had our largest order yet at a private house near the Drunken Duck. Luckily we were given time to buy in some nice oak from a farm near Skelwith Bridge. We had lots of people from round the country helping to make the parts but it still took a long time. 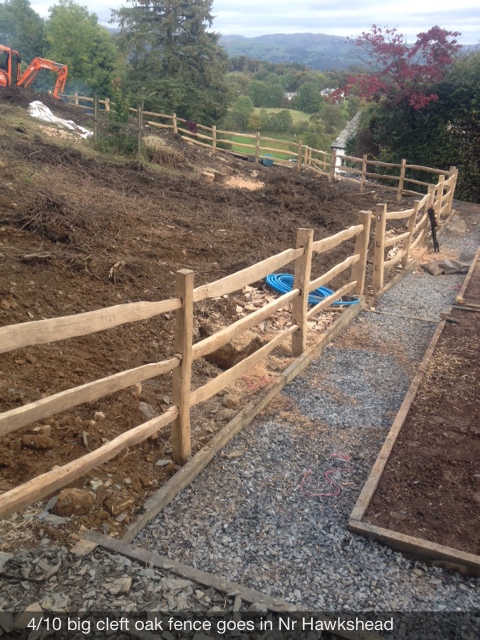 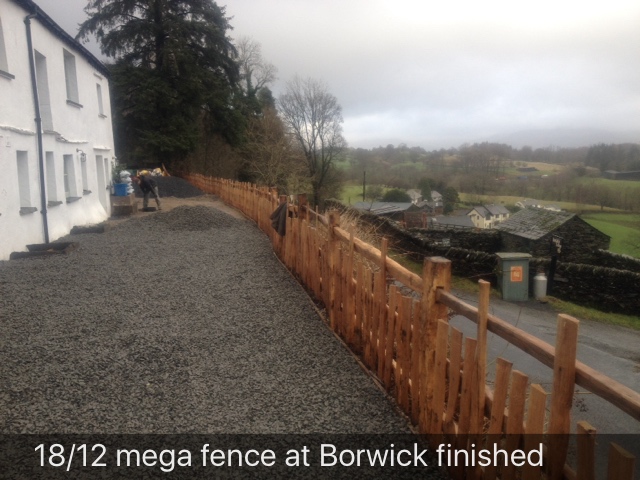