At the start of August it started raining and but for a few days relief, been raining since. The charcoal season came to an abrupt standstill and moving around the woods returned to battling muddy slopes. My brother keeps telling me its really dry in Leicstershire and they badly need some rain, hmmm. But its not all gloom. After a drought of cleft oak orders a veritable deluge came in and we have been busy with cleft oak fences, gates and gate kits. We have had some activity at Stoney Hazel. We've finished extracting the wood from the previous section and been squaring up poles for fence posts. 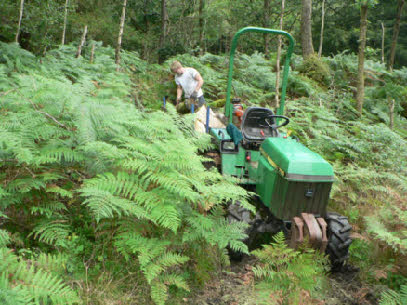 [extracting wood]
The 10th anniversary Woodland Pioneers was on in September and turned out to be quite challenging. Despite high winds, lots of rain, rotten and twisted oak butts, a small group of very practical people produced a cleft oak bridge to replace a slimy railway sleeper. 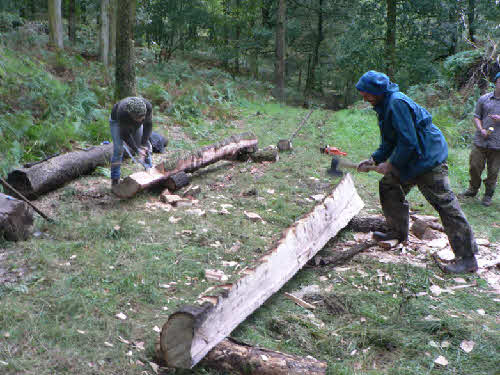 [hewing bridge beam]
The group had two timber framers amongst it who came in rather useful, and I think they taught me more than I taught them. The bridge was duly opened in the rain by Walter Lloyd cutting the barrier tape and sixty people then trooped across the bridge. Despite most of the cleft oak deck not being pegged down no one died, result. 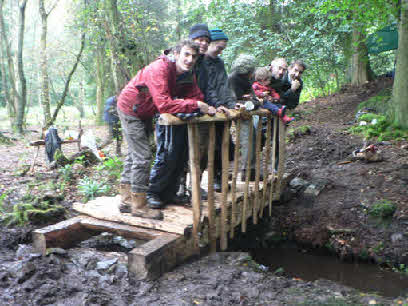 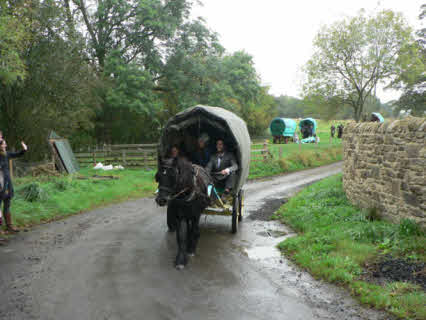 In October I went over to Hexham for Saul and Sophies wedding. Saul started as an apprentice with me (see early diaries) and went on to become a very competent swill basket maker before moving to Hexham to work woods and breed fell ponies over there. Here they are coming back in their cart from the ceremony. Blooming great day all round.

A strange couple of months. We have moved the kilns to Craggy Woods now above Staveley and have even borrowed one of Brian Crawley's old kilns. I learnt to charcoal burn with Brian so this will be the kiln I learnt on. Its now owned by Mike Wallwork over near Blawith. The kiln had to be recovered from deep in Torver common. By where the kiln was sited is some of the best remains of a charcoal burners pitstead that I've come across, with the fireplace still pretty much intact. 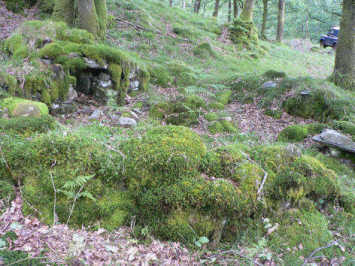 [charcoal pitstead]
I had no idea when I went to collect the kiln what a tortuous track it would have to come out on. Pulling the kiln out on the trailer I came to the top of one really steep narrow bit with a steep edge on the right, so steep I couldn't see the track in front of the bonnet. After a bit of girding of loins I went for it without mishap and a round of applause from some walkers. Getting the kilns into Craggy woods is difficult because its up a steep slope with very slippy grass. 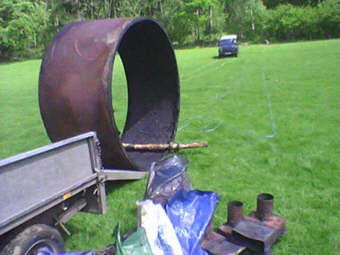 [kiln Craggy]
Rather than risk a repeat of when trailer and rover were sliding backwards down the hill to eventually jack knife and end up going down the hill the right way. I used some thin rope up to a pulley to pull the kilns up the hill to platforms laboriously carved out of the hillside by James and Sam. The borrowed kiln has been christened Molly for the duration of its stay and has been performing very well, it has larger chimneys and seems to burn noticeably hotter than Maureen or Margaret. 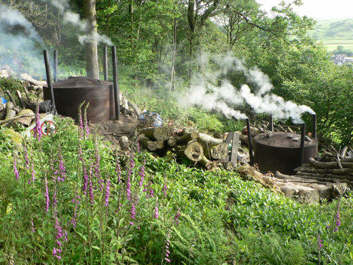 [3 kilns going in Craggy Woods]
Bark peeling has been continuing at Stoney Hazel and we've now got a pretty good heap of bark for the tannery, and Sam has been demonstrating how to 'grind' down a peeled oak pole.

The weather seams to be following a similar pattern to last year with a winter finishing and summer starting a day later. August will probably see a succession of lows battering everyone huddled in caravans and tents and charcoal sales finishing early. 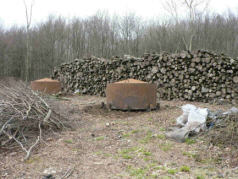 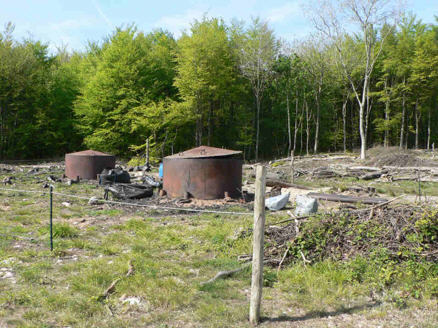 Anyway charcoal burning has started in earnest and we have quickly finished the remains of the pile of wood at Dalton Crags. Charcoal sales are going bananas at the moment and we have very quickly got through the pile stored from the end of last year. We are helping out with bagged charcoal that is going to Booths and we have had to borrow a stitching machine to close the bags. It's a bit alarming as it appears to career towards the fingers that you are holding the bag with at high speed. So most of the bags were sealed to the accompaniment of wild screaming although it actually looks like it would be difficult to get your fingers into the stitcher. The early nice weather also caused the oaks to start peeling early, and we were able to peel from the start of April. 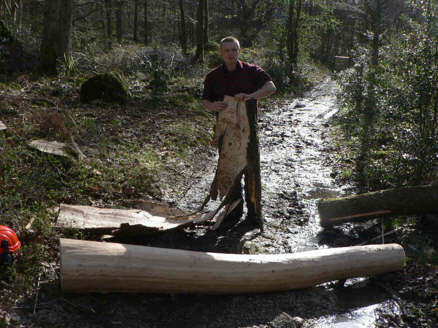 Eaves Wood is finished and we have started on a new section in Stoney Hazel. 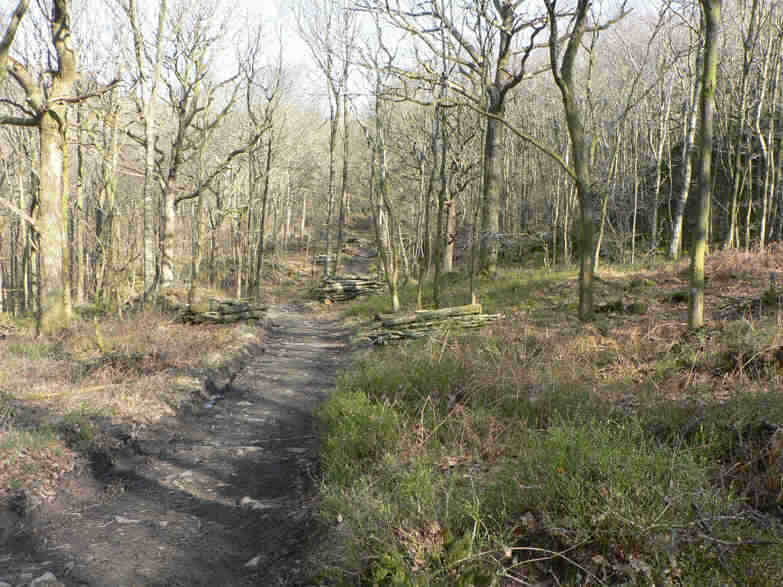 [Stoney Hazel after a bit of thinning]
It's a slightly different to our other sections in Stoney as its more thinning than coppicing but its right by the track which makes life a lot easier to the other sections. The section has 300 trees in it , mostly birch and oak. We are cutting the understorey hazel and birch first, then setting about the oak which should be peeling soon. There is very weird looking depressions round the wood other than the usual charcoal pitsteads and Alex Todd has got the amateur archaeologists in to see if they can make sense of it. The run of mishaps continues after my LandRover was broken into and my chainsaw stolen, downside being having to fork out £500 for a new one, upside got a new chainsaw to use which is always good. It does seem to be a gang going round targeting forestry businesses as Rebecca Oaks has had saws stolen and I've heard of other yards being broken into around the same time. Sam has helped to cut the willow patch this year, the yield seemed slightly down because its starting to get a bit shaded. 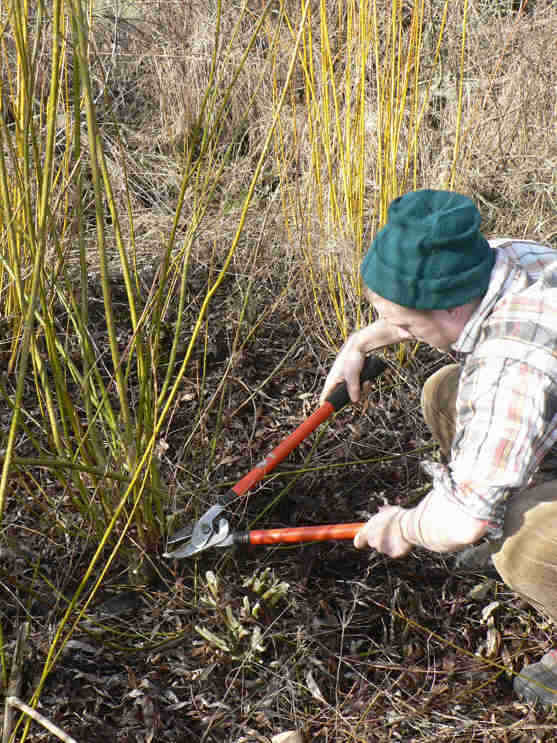 [Sam cutting the willow patch]
Sam the apprentice continues to enjoy himself and has been dabbling in curing a deer hide to make a skin for the banjo he is making. He started up at the barn in Windermere soaking the skin in water with ash in to make the hairs drop out. The mix was in a large plastic 'tubtrug' and Sam then carted the whole lot back to Kendal on the train and walked it back through Kendal on a borrowed shopping trolley.

We've moved into our winter felling phase and started with another section at at Eaves wood. This area had been cut around 98 so the material is quite small and not particularly straight. It probably got chewed by deer early on. An interesting feature of the coup has been evidence that layering is working. 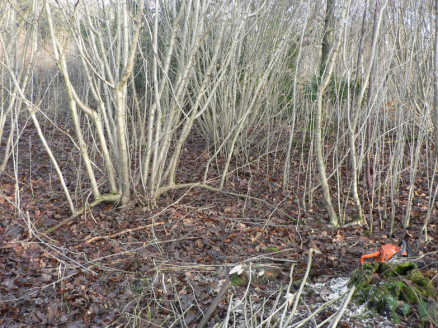 [a double layered stool]
This is a method of leaving a shoot when you cut a stool and then pinning it to the ground with a peg,log or stone. When we were doing this last year I was a bit dubious that it would work as the soil is so thin and dry, but it obviously does. We've also been extracting wood at Stoney Hazel where the wildlife continues to amaze. After sightings of Koaties a couple of years ago (related to racoons ) James has now seen a group of three Red Kites sat on a tree near Rusland church. While I've seen a white stoat scurring around in the grounds of the church. The prolonged snowy spell must have been great for it, but when the snow went it stood out like a sore thumb. Sam the apprentice has been doing well and turns out craft items on a regular basis. A 'spoon off' last week between the three of us resulted in a poor third for me so I will have to practice more. 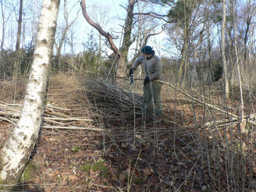 Most of the cutting is actually finished in Eaves Wood except for thinning out a few standards and the views are tremendous over Morecambe Bay. On the subject of Sam you may have seen him briefly on Countryfile on 9th January when he spent the day working with Rebecca Oaks.