1.12.08 Its been a pleasant couple of weeks getting back to some green woodwork after the seemingly endless grind of firewood production. We have

been back to the cleaving breaks we set up in Chapel House woods to make a large cleft oak fence order. [cleaving an oak log] The process of splitting a large log down using just wedges and cleaving breaks is still something I find magical, and when doing it find it easy to imagine someone doing the same thing thousands of years ago. Well last year at least. The weather while we were cleaving last week was superb with cold clear days, by far the best days in the woods. [shaving cleft oak rails] [finished rails] 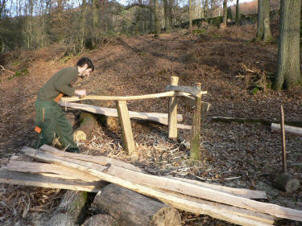 Its strange how you get two large horticultural charcoal orders coming in at the same time and shortly after two cleft oak fence orders. Probably followed by most of the population wanting firewood. 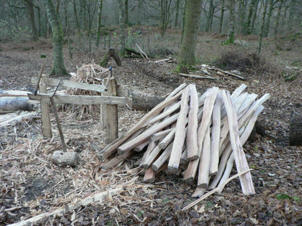 18.11.08 One of the interesting aspects of having a website is that its working as free advertising all over the world. I've had emails from Africa asking about the design of my kilns, been offered Polish hurdles (quite tempting) and Eygptian orange wood charcoal. When I got an email looking for the price of a tonne of horticultural charcoal to go to Italy, I sent off the price fully expecting the enormous cost of transport to knock the idea firmly on the head. When they accepted the quote I suddenly started thinking 'what does a tonne of horticultural charcoal look like, how do I send it, how do you export stuff?' [bagged up and ready to go] Well a couple of weeks later the answer is:- 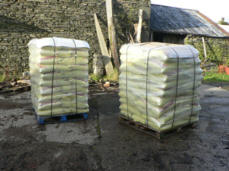 it looks like 2 high pallets worth heat sealed in coal bags. Sending it seems a pretty fraught process as you wave goodbye to the pallets and they disappear to who knows where. The charcoal is going to a research institute looking into its use on wheat fields. The research into biochar seems to be gathering some momentum and there was an international conference in Newcastle last September. While it seems a hopeful new market at the moment I think as the science matures they will become much more demanding of a consistent product, probably produced by a retort or more industrial process. Just to sound like I've been hobnobbing with the scientific elite, I also went to a meeting about the new Windermere Catchment Renovation Project. The highlight was a talk by the director of the Freshwater Biological Association who said that there had been a huge increase in the number of roach in Windermere. You wouldn't think this was a bad thing but they are eating all the insects and water fleas which in turn aren't eating the algae (because they've been eaten). The algae eventully dies off and drops to the bottom of the lake de-oxygenating the water so forcing the artic char up into an ever narrowing strip of water between the de-oxygenated and the surface water that is too warm. On the coppicing front we have finished our section at Stoney Hazel, here are some before and after shots. 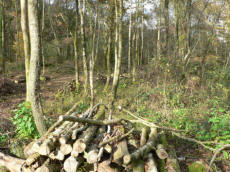 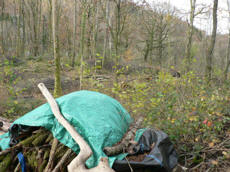 this view looks quite severe but is probably nearer to the correct canopy density for coppice with standards. And due to the extra light and deer fence the re-growth is coming through at great rate.

19.10.08 September has been a busy time for shows and auctions but I've only got to demonstrate at one of them. First off was the Westmorland County show where the rain held off for the day (many of the small shows have been cancelled due to bad weather this year) .

[Cumberland wrestling] For the first time ever I watched the junior Cumberland wrestling which seemed to pitch enormous youths against much smaller opposition. It was eventually won by a farmer boy from West Cumbria who looked like he spent his time carrying cows out to pasture. A quick trip over to the auction at York to look at potato bagging equipment for bagging up charcoal which I should have got but after waiting two hours for the auctioneer to get to the lot promptly froze when the auction started and missed getting the equipment for a reasonable price. It's still strange to see traditional flat cap and string round the trouser knee farmers getting text messages on their mobile " George is the only one who texts me". 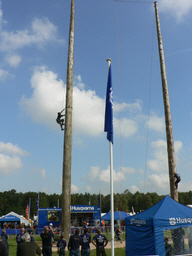 [pole climbing at the apf] The APF forestry show was on this year (it's every two years) and I found it very interesting this year. Besides drooling over giant forwarders there was a significant amount of equipment for small woods and also I got to see lots of people I met at the APF in Lockerbie and at the Royal show a few years back. The summer has been incredibly wet this year and most conversations seem to end up as " I can't get any vehicles into the wood, onto the field or up a track. At the end of September was a flurry activity as I did the Silverdale woodfair where the highlight was talking to David Bellamy we had a conversation about an experiment he had on one of his first programs where the severed an oak tree which was in leaf and plonked it in huge bath of water to measure the amount of water sucked up. This was followed immediately by Woodland Pioneers, the BHMAT annual event. This year I volunteered to take the returners (people who had been on woodland pioneers before) and with Twiggy's help make a cleft oak fence and gate for Chapel House wood. This was quite an incredible group of people (we had 12 students on the course) and despite bad weather they produced three hand hewn posts a load of fencing and nearly completed two chunky oak gates in the four days. 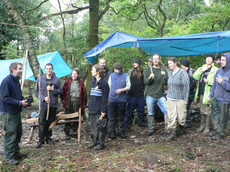 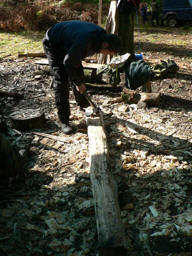 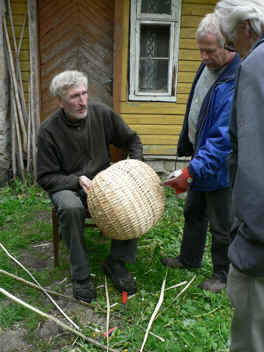 [hazel basket maker] Mid May saw me on a Coppice Association trip to Estonia. The best one of these trips I've been on with Estonia and particularly the island of Saameraa being a brilliant place for wood crafts and great woodlands. 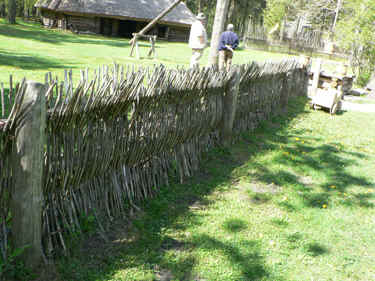 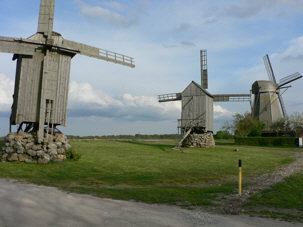 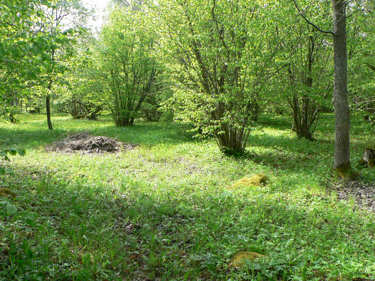 [wood pasture] There is a much lower density of deer on Saameraa (wolves and people with guns) so the hazel grows lovely and straight and juniper invades the fields like gorse here. We saw a few small craft works making spoons and laminating lots of small blocks together to make place mats and chopping boards. The juniper has an incredible smell which scents any room you have these items in. Andres was our guide round Estonia and it was fascinating to hear about his time under Soviet rule. This ranged from the inefficient when he applied to go to Vietnam and was granted permission (17 years later!) to the rather sinister where a pupil at school doodled an Estonian flag in the corner of his school book and his mother was hauled into the local KGB office to explain how this could happen while the officer cleaned his revolver. Anyway to catch up its school holidays so I'm on short time working at the moment but I have been doing a few more charcoal burns for the brown bag market. [kilns ] On the cherry bed front that I made after Christmas, I've now put it together and lying in it. Its very comfortable and doesn't creek. Even when Moira lies on it. 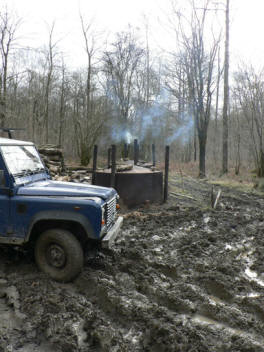 [wading through the mud ] January was particularly miserable this year with rarely a sight of the sun and huge amounts of rain bucketing down. For large parts of the month I withdrew to the barn where I've made myself a new bed out of some cherry boards that I milled up four years ago. Luckily there weren't too many firewood orders after Christmas as its taking me close on a day a load to extract it out of the mire at Witherslack and then transport it 20 miles to the barn for processing. This coincided with doing the accounts which seemed particularly bad for 06/07 with the vehicle costs (fuel repairs and insurance) virtually doubling for the year. This was probably due to burning at Haverthwaite and Stoney Hazel. As the economics are tight at the best of times its interesting that the location of the kilns can make such difference. However the signs of spring seem to start soon after Christmas. The shoots of daffodils start coming up, honeysuckle comes into leaf very early and the cut birch stumps start pumping out sticky sap. It sounds a bit strange but the smell of the woods seems to change overnight from a dormant decaying smell to a faintly sweet smell. I don't know if this is wishful thinking or hormones being given off by plant life as they detect the days lengthening. Just as business was seeming a bit slack I got the call to fell trees at a manor estate. They turned out to be very tall and overhanging a very expensive looking walled garden. We managed to get them all down with no mishaps but had a couple of heart stopping moments, one when the tractor with the winch on appeared to be dragged back by the tree falling over the wall. In fact the tree had just got caught behind another tree and the tractor was pulling itself backwards. The second was an ash tree that was very near the wall and I had left a thicker hinge on to make sure we kept control as it was winched over. As winching started the tree began to split vertically and the split wood at the back headed towards the wall eventually stopping about a foot away. They also wanted a large sweet chestnut sawmilling. This was about 3ft diameter and it took us two days to mill it up. Seemingly never ending you start getting an idea of how much timber comes out of a large trunk.